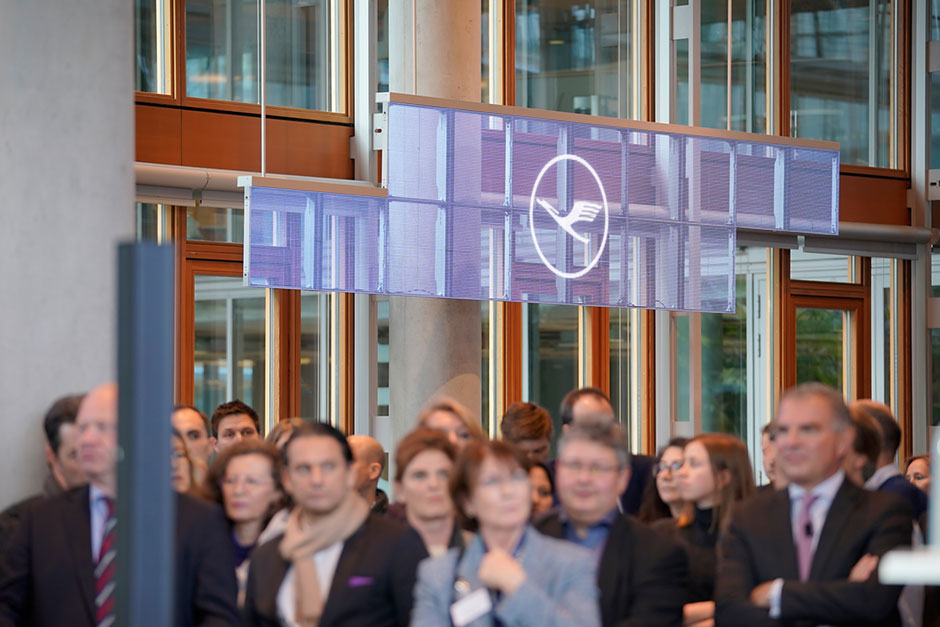 The Lufthansa Aviation Center in Frankfurt has presented itself light-flooded and cosmopolitan since its reopening in January 2019. Semi-transparent LED installations by tennagels Medientechnik reflect the elegance of the architecture above the counter and throughout the foyer. Ten LED screens with a length of up to six meters on steel cables float from the ceiling in cloud formations. The digital signboards provide travellers with variable content ranging from the sustainability of the company, via the presentation of the fleet, right up to the current presentation of the route network.

The Lufthansa Group uses the high-resolution LED screens with a pixel pitch of 3.9×7.8 mm to convey information or simply for contemporary entertainment. If required, the largest of the ten LED surfaces with 15 m2 can also be used as a digital highlight at press conferences and special events of the Lufthansa Group.

Perfect synergy for a successful project

It was only the homogeneous interaction of all companies that made the professional implementation of the uniqueness of the Lufthansa Aviation Center possible.

No other architectural office than Ingenhoven architects GmbH took up the challenge of the entire project and realized a high-quality office and working environment that can scarcely be beaten in terms of clarity and transparency.

BLACKSPACE GmbH from Munich were responsible for the unusual arrangement of the LED screens in the foyer and their media content.

The Lufthansa Aviation Center is a trend-setting example for the intelligent handling of the potential of synergies. The Lufthansa building is one of the first buildings in Germany to be officially allowed to call itself the “Green Building” and sets completely new standards.