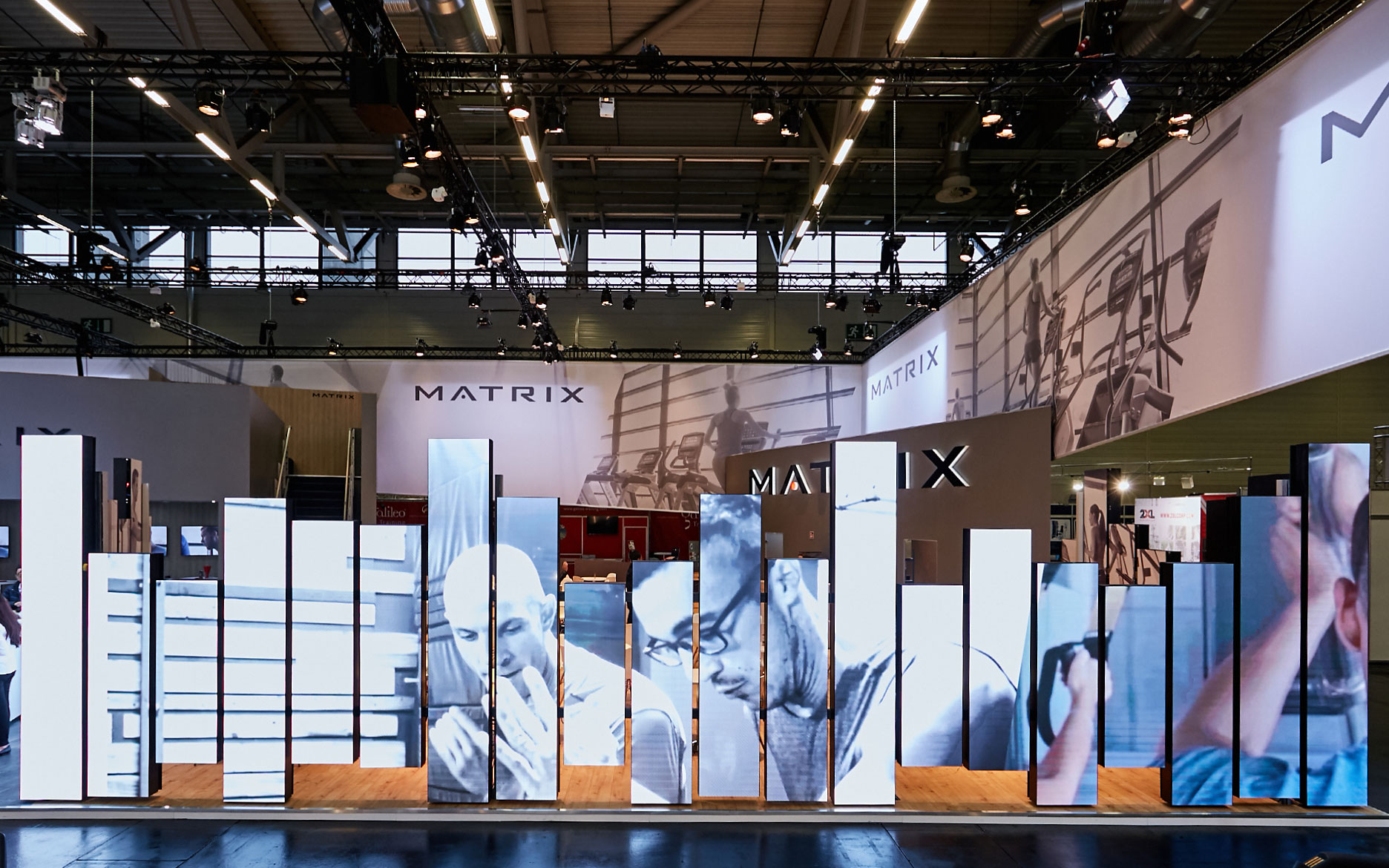 Since 2013, we have been designing and realizing the appearance of the high-end fitness brand annually, in close cooperation with the customer and Agentur Bauwerk. Different configurations of LEDs and media carriers have been used over the years with various highlights. Kinetics or touch technologies are used in the sense of the message.

Depending on the space, budget and spatial situation, differently scaled systems were installed. tennagels also supervised the technology during the duration of the trade fairs.

Since 2013, we have been working closely with Johnson Health Tech. At the appearances of their premium brand MATRIX – including this year’s FIBO in Cologne. In addition to the technological translation for the stand, we are also planning a concept for the MATRIX party every year, which took place this time at the Cologne E-Werk.

In order to create a separation between the lounge and fitness area, a multi-stage spatial LED room installation was created, which should remind you of a heart beat curve.

We realized the individual panels with the workhorse curveLED® P3.91, which had to be installed in a complex way with pixel-accurate offset. We have adapted the content and composing it ourselves.

The media sculpture consisted of a total of 18 m length in alternating building heights of the individual LED struts. The films and corporate content of the brand itself were shown.

As an additional sales tool, we provided a TouchTable with 2x 4K 52″ displays and self-developed software: Customers and fans of the brand were able to inform themselves and interactively about the product world of MATRIX.

The fair’s LED concept was also taken up for the stage at the Cologne E-Werk, where bands such as Culcha Candela appeared. Showacts and DJs accompanied the event until late into the night. The entire LED installation offered the VJ enough pixels for a perfect party stage.

The fact that we also converted the sound system, the complete rig and the lighting, almost slips into the footer. 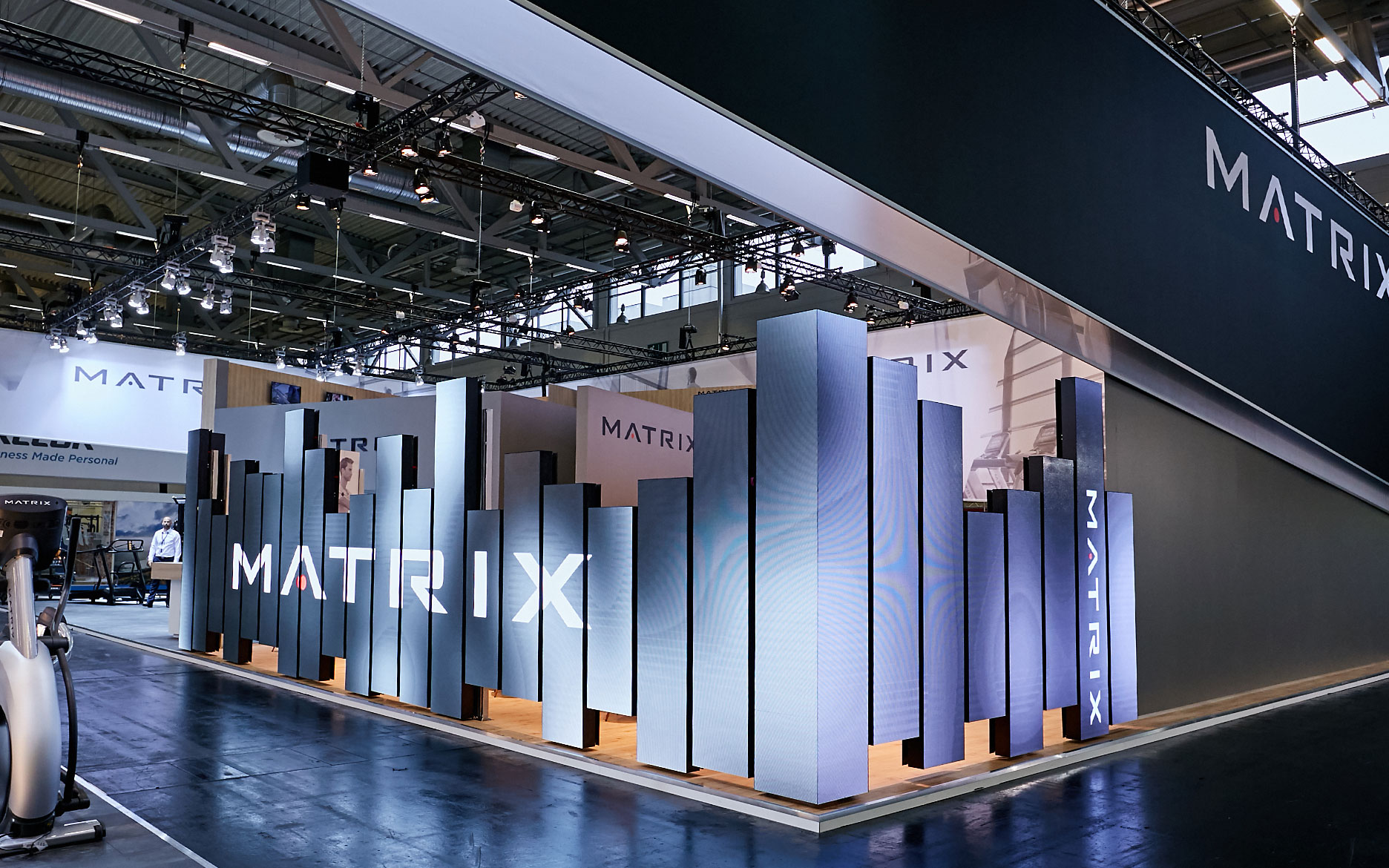 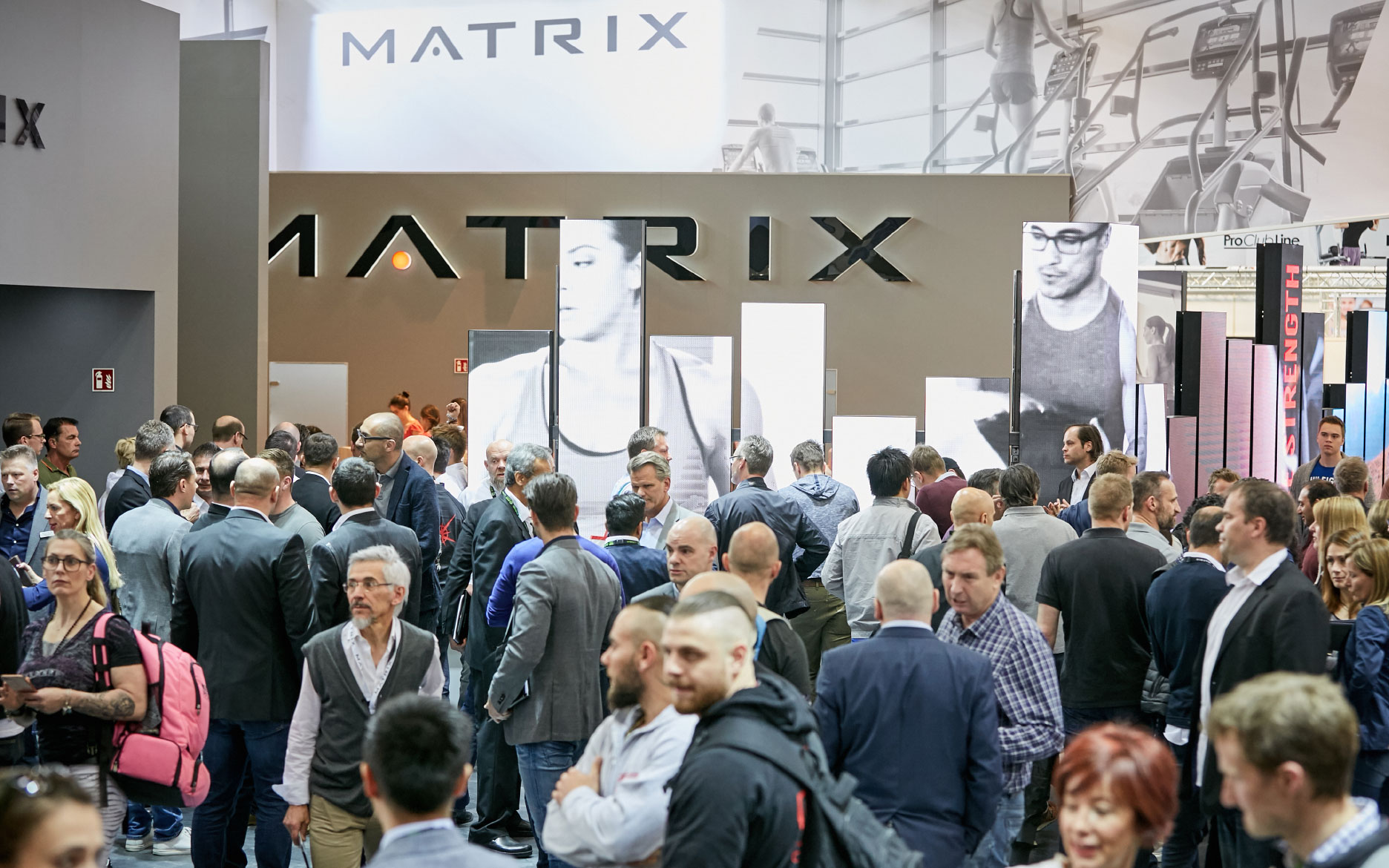 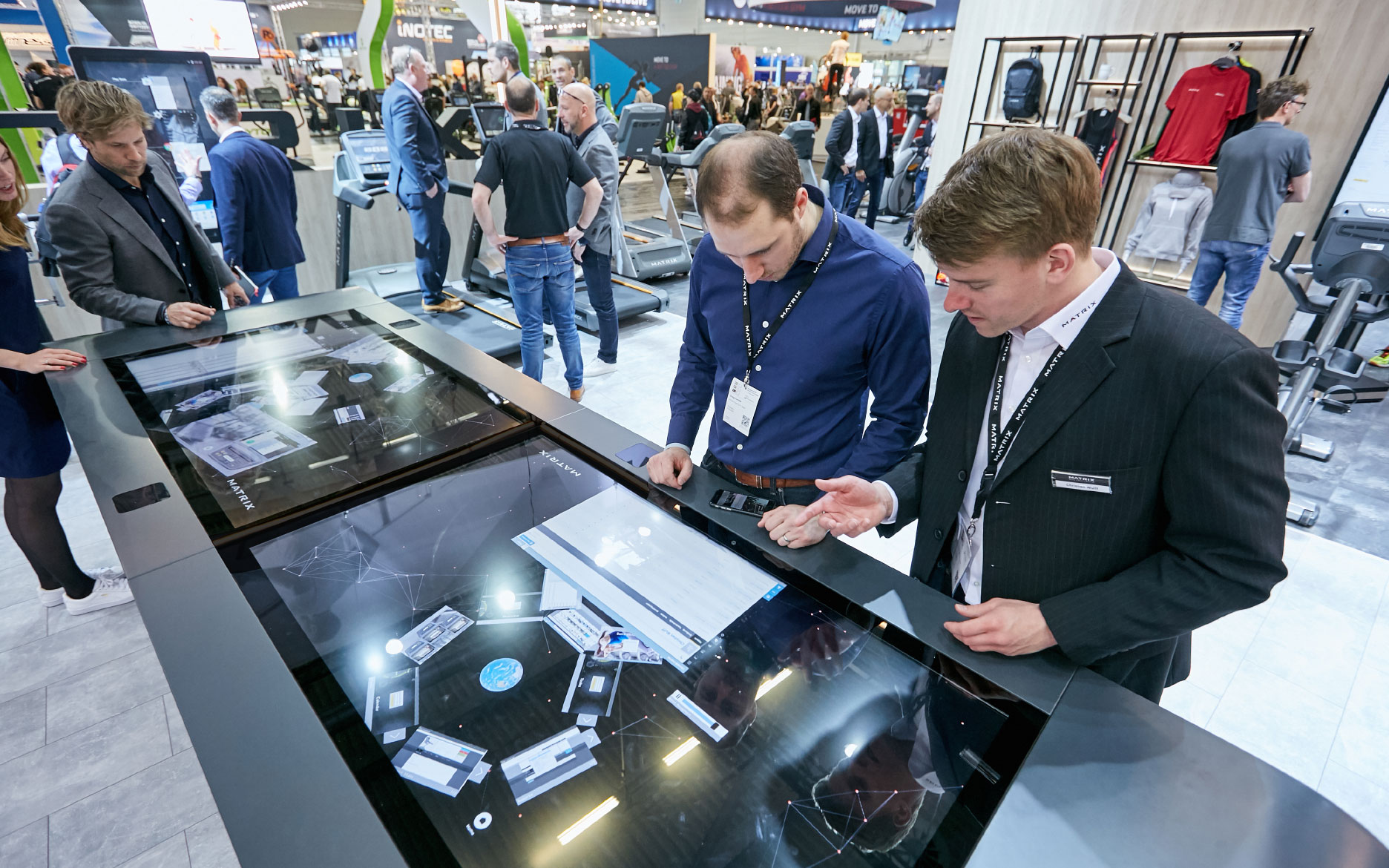 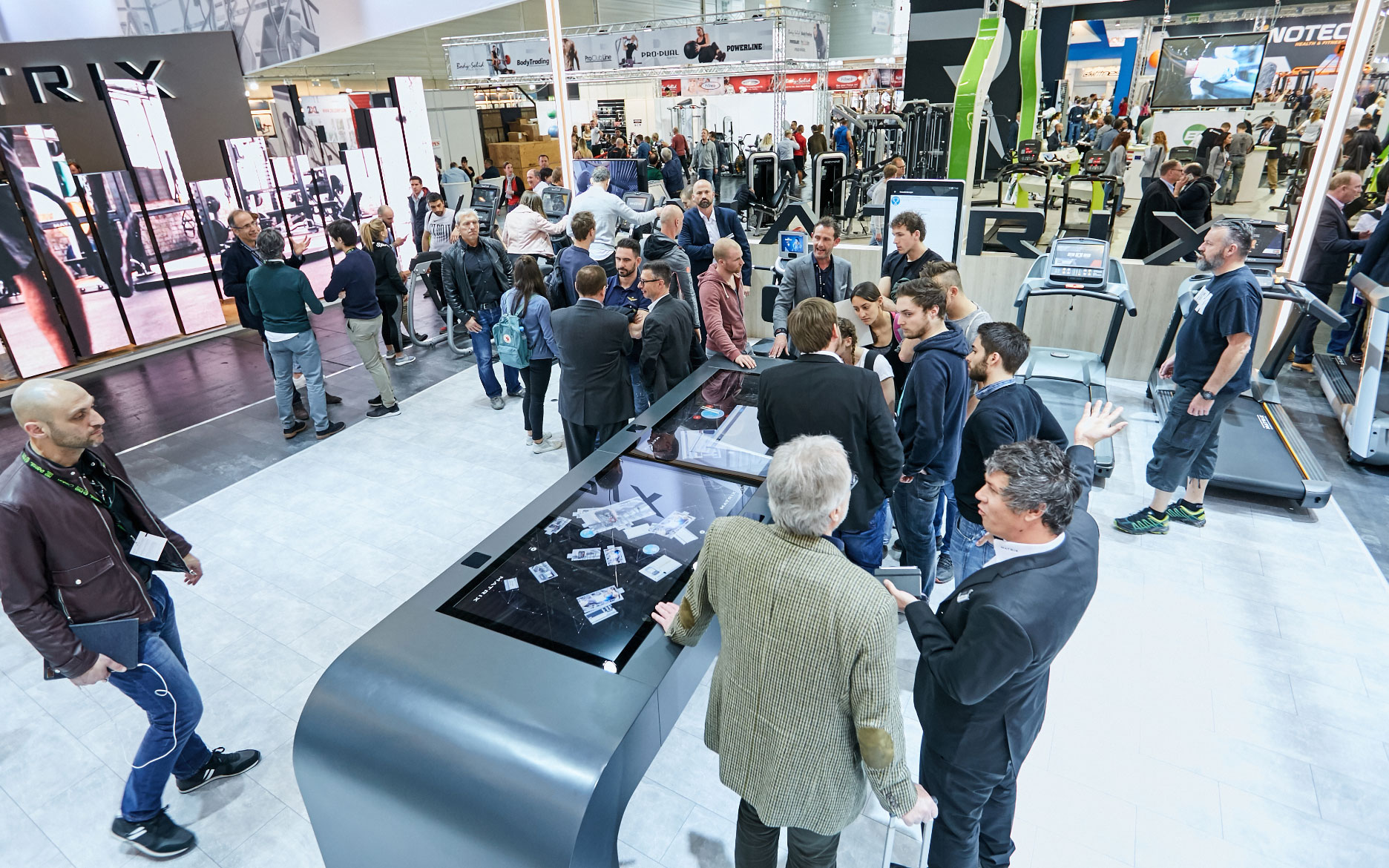 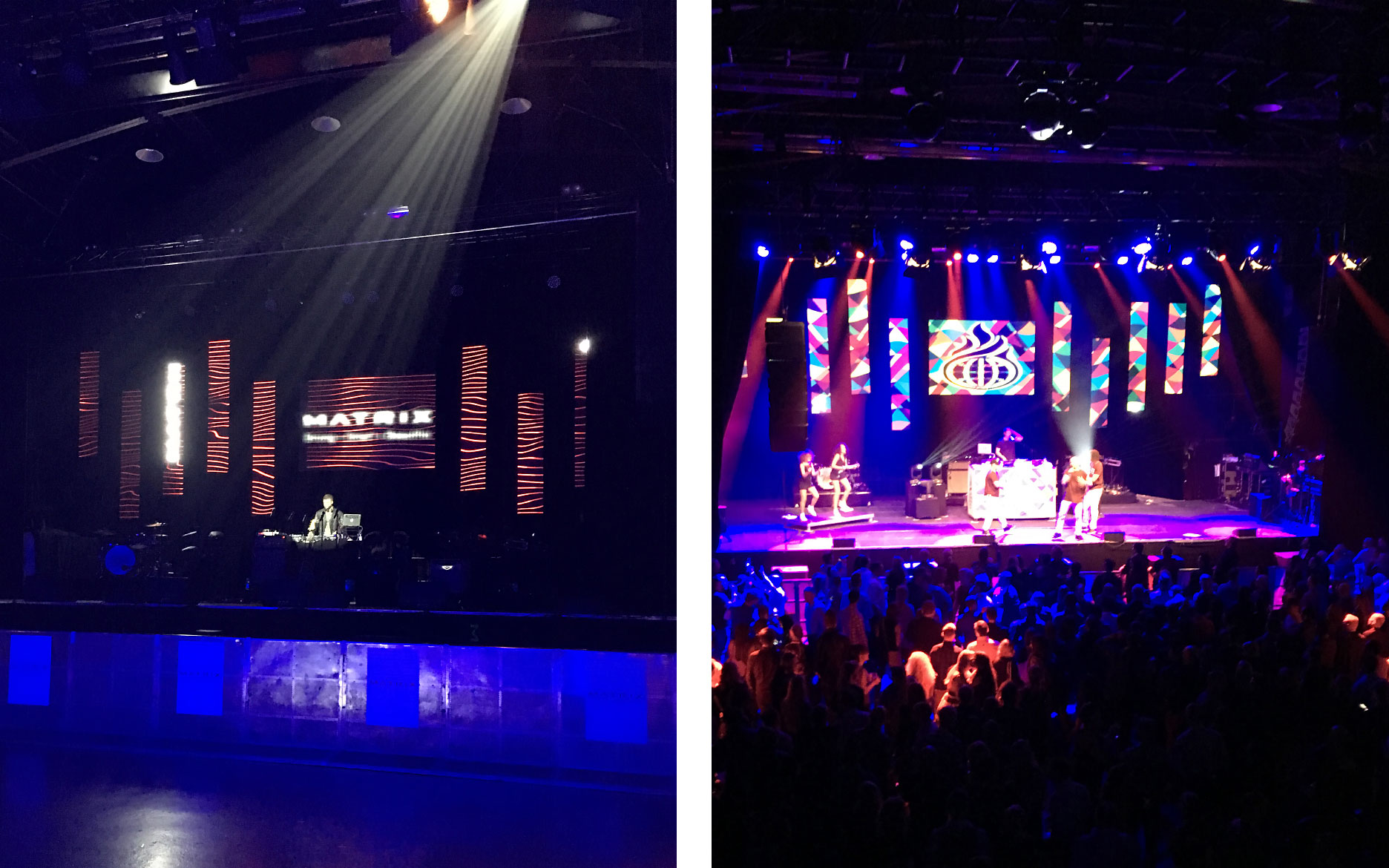 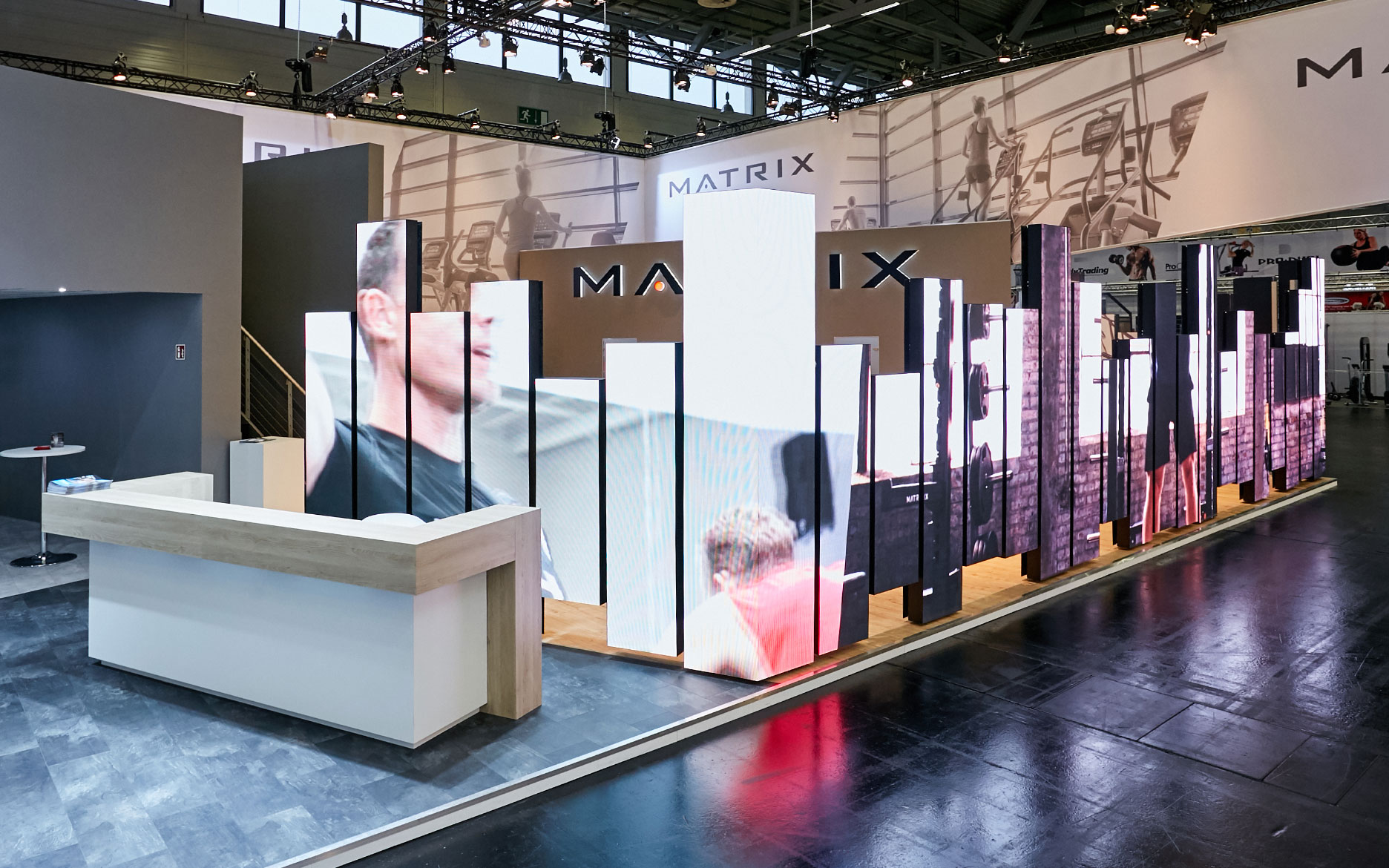 In addition to last year’s concept, a 12 x 2.24m sized curveLED® was implemented above the booth. The curveLED®-40mm-Material was a perfect, technical match: Advertising messages can be placed discreet while the material’s high transparency ensures an open and inviting fair-booth.

With a circulating, closed curveLED® banner of a total length of 120 m and a hight of 1.60 m  tennagels media technology proved once again their innovation strength. The banner was the main eyecatcher of the fair and already astonished the visitors from the distance.

Depending on the current demonstrations on the stand several videos could be assigned individually to flexible displays. 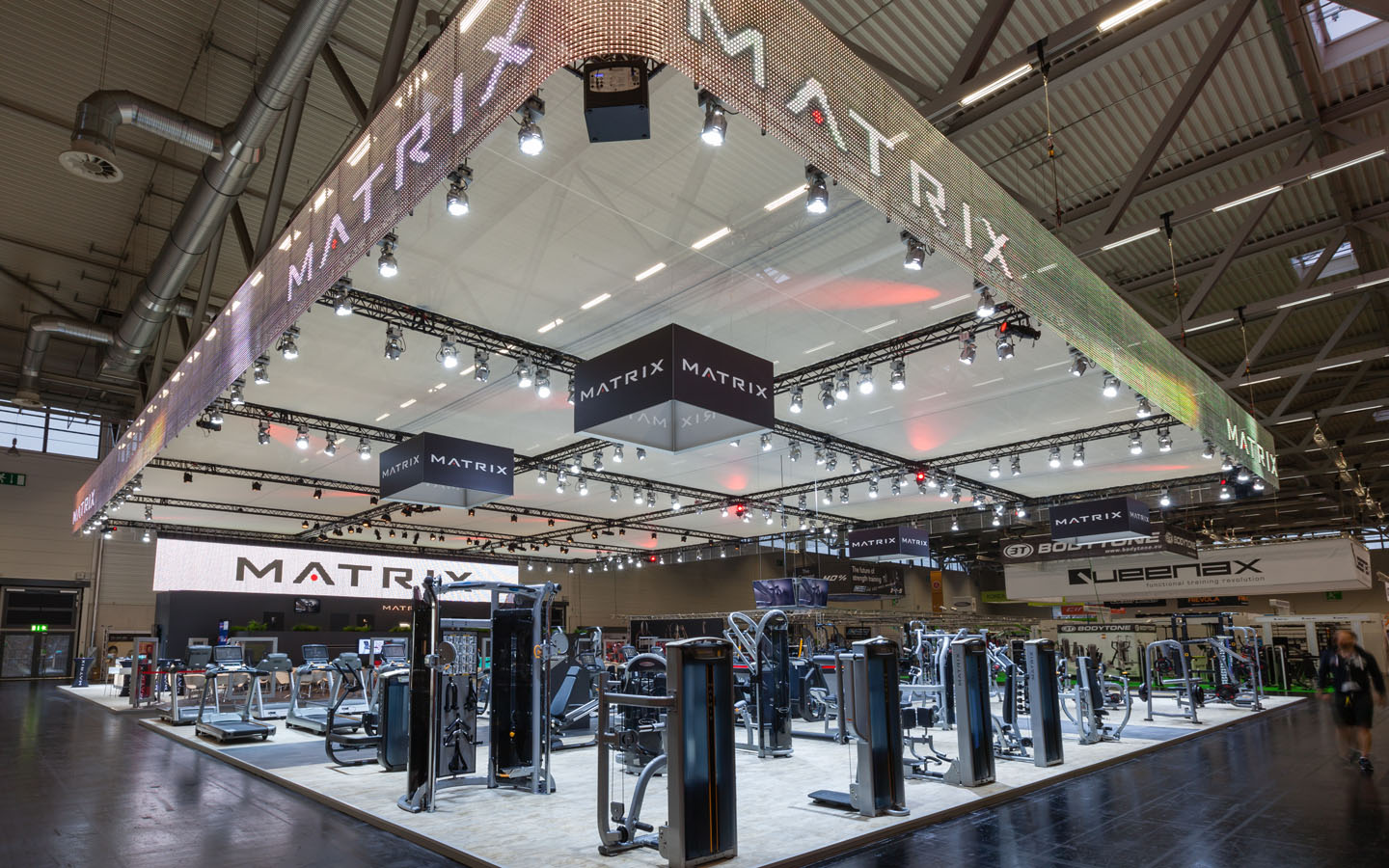 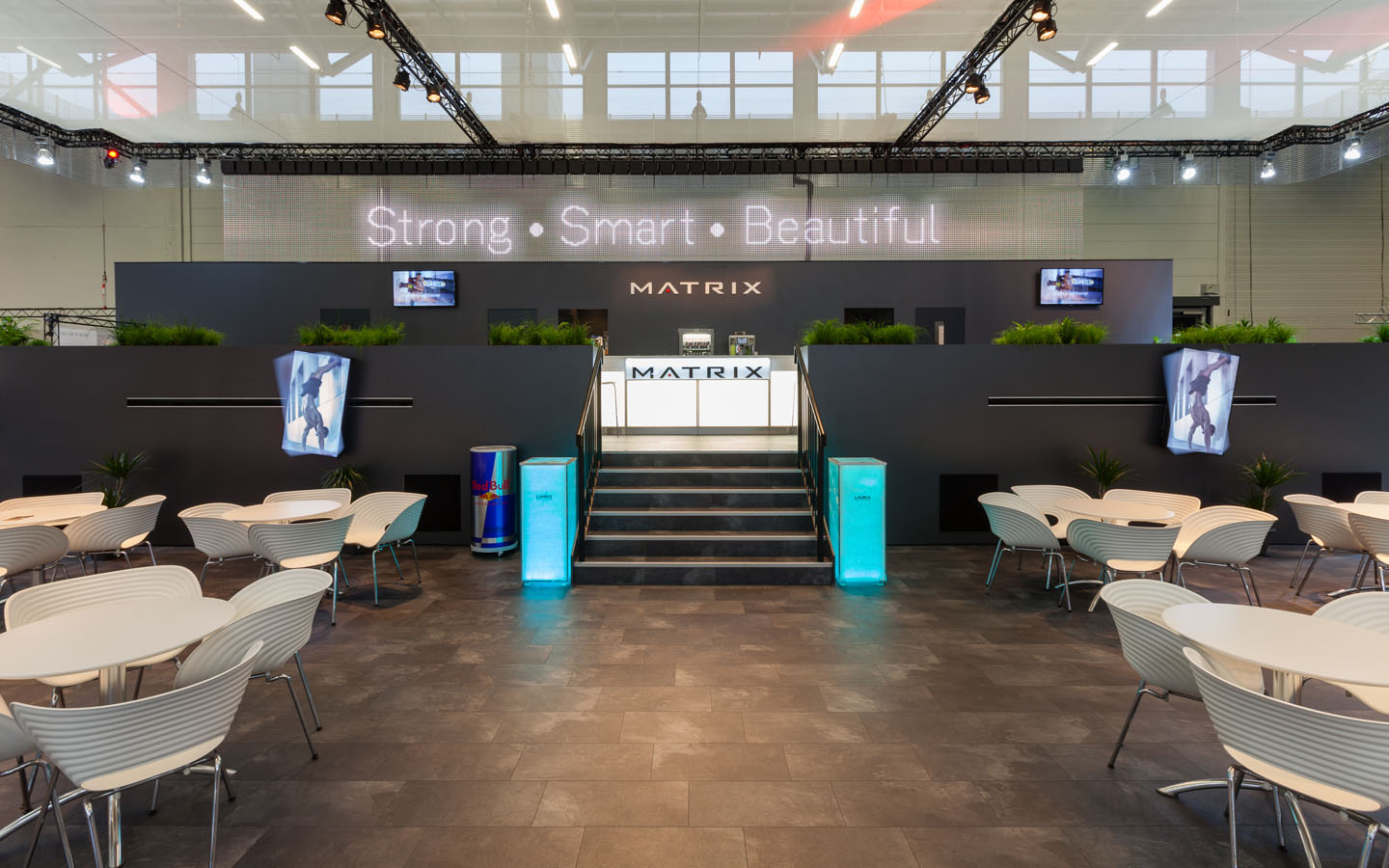 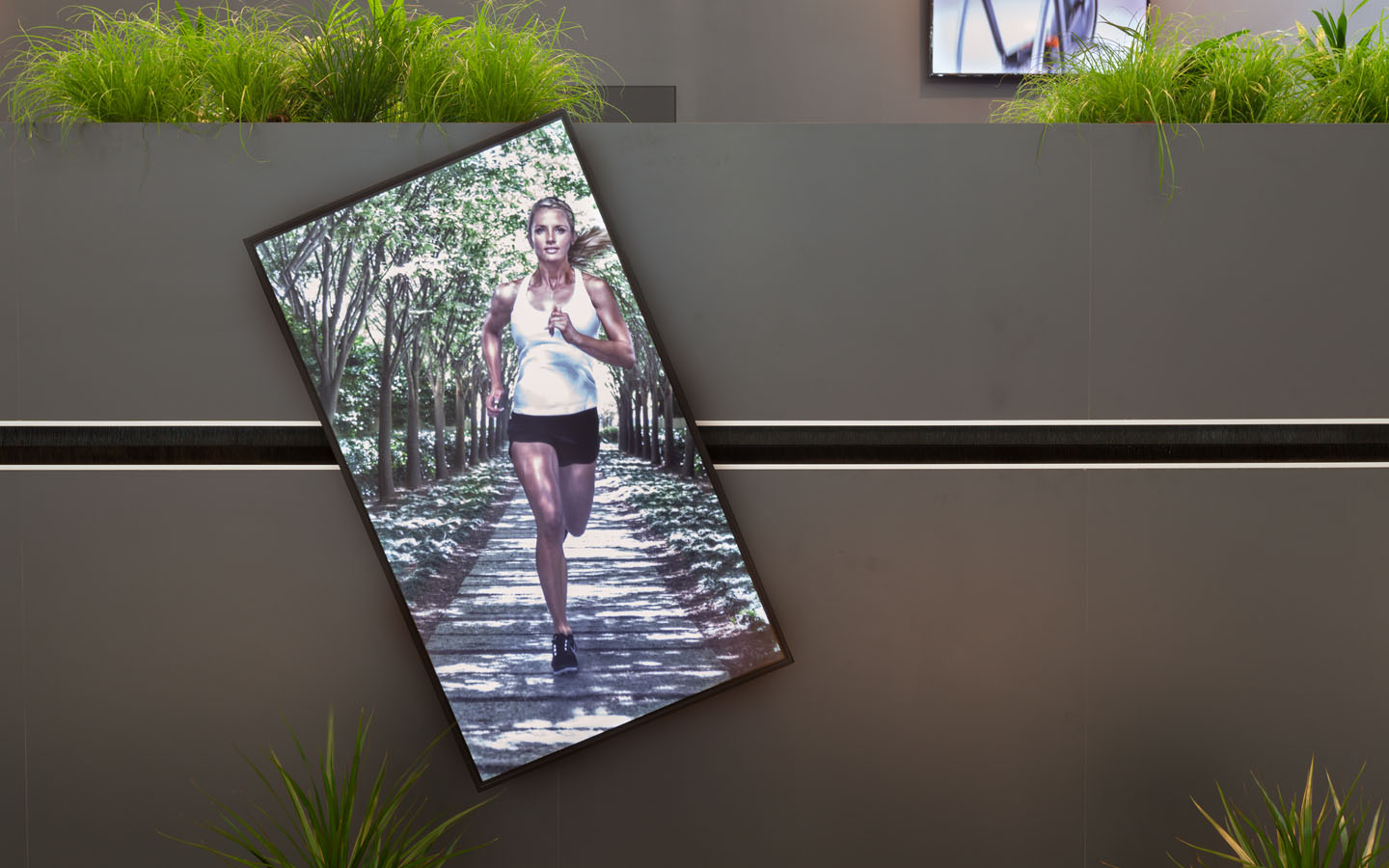 Since 2013, we are responsible for the overall technical management of the Matrix booth, the Premium Studio trademark of Johnson Health Tech Germany GmbH.

With a circulating, closed curveLED® banner of a total length of 120 m and a hight of 1.60 m tennagels media technology proved once again their innovation strength. The banner was the main eyecatcher of the fair and already astonished the visitors from the distance. Two turning and horizontally movable displays on which the quality studio products of the brand „Matrix“ of Johnson Health Tech. were presented, provoked open mouthes with the booth guests. Two movable displays in different sizes completed the exclusive fitness booth.

A further highlight: an extensive video control on all medial components played all film contents synchronously. Depending on current demonstrations at the booth, however, different videos could also be assigned to the flexible displays. Trendy black cross beams with white ceiling sails put the bright exhibition exhibits into scene. More than 200 headlights lit the high-quality equipment and invited to staying in the lounge. The Meyer Sound System provided excellent sound quality. 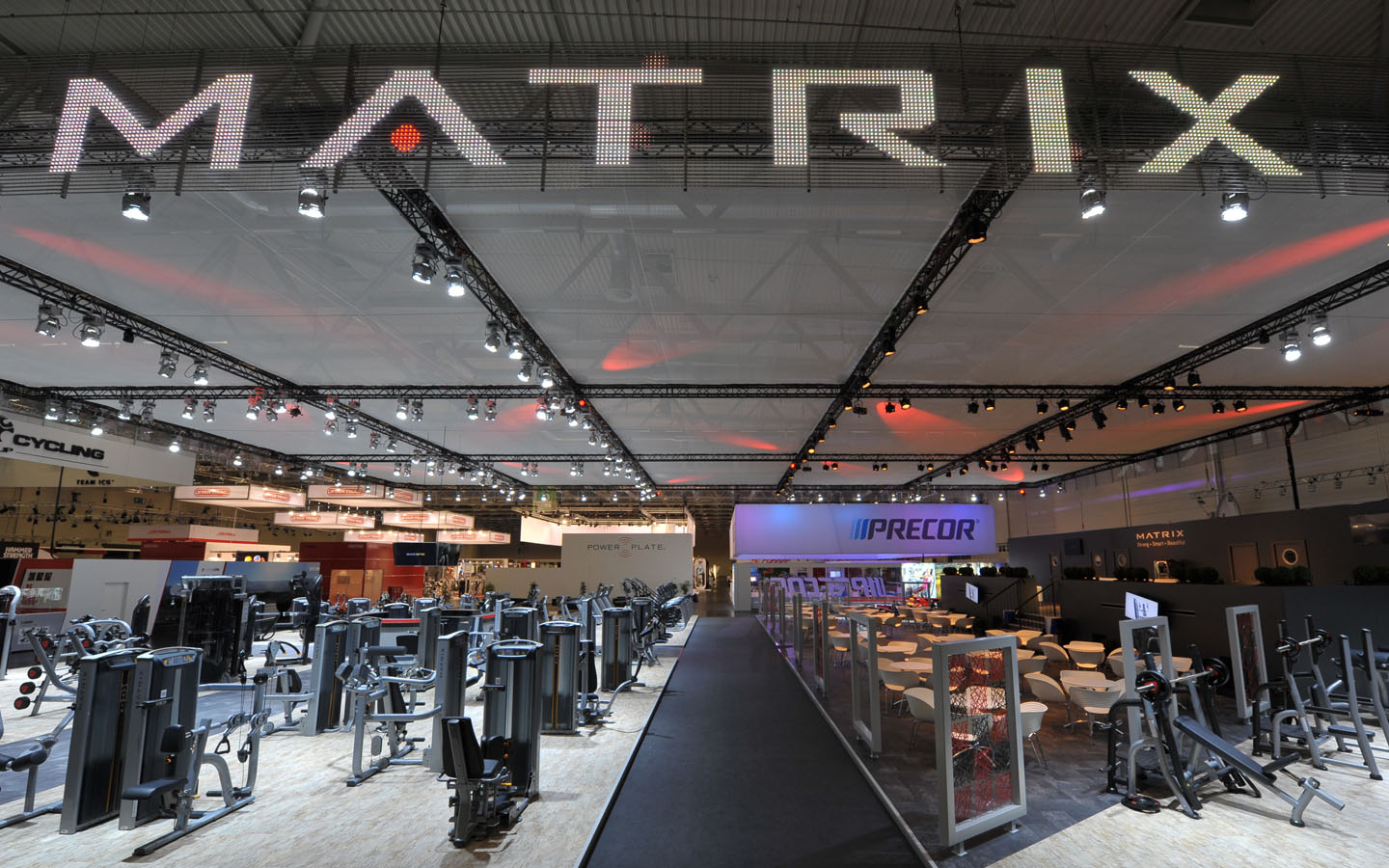 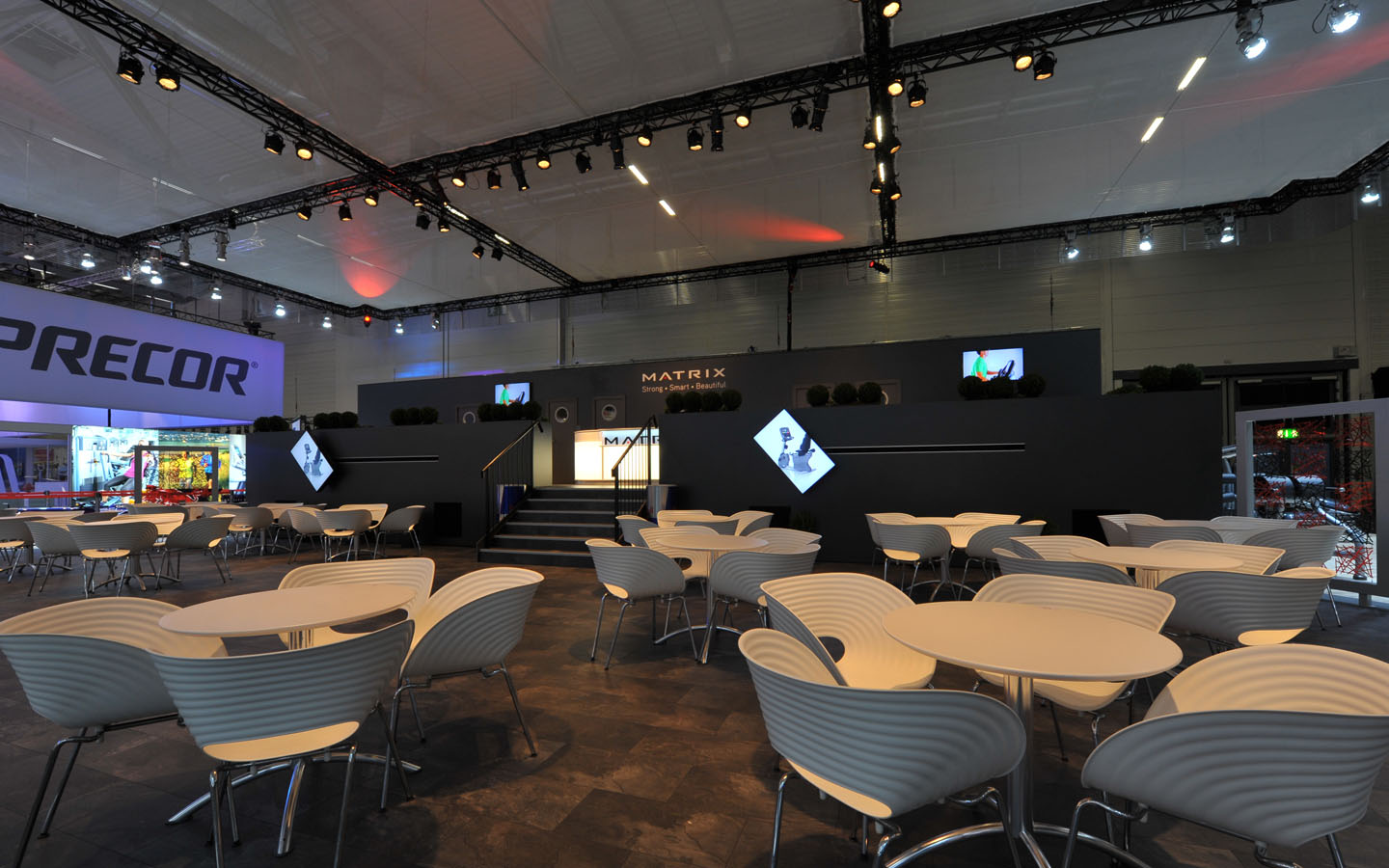 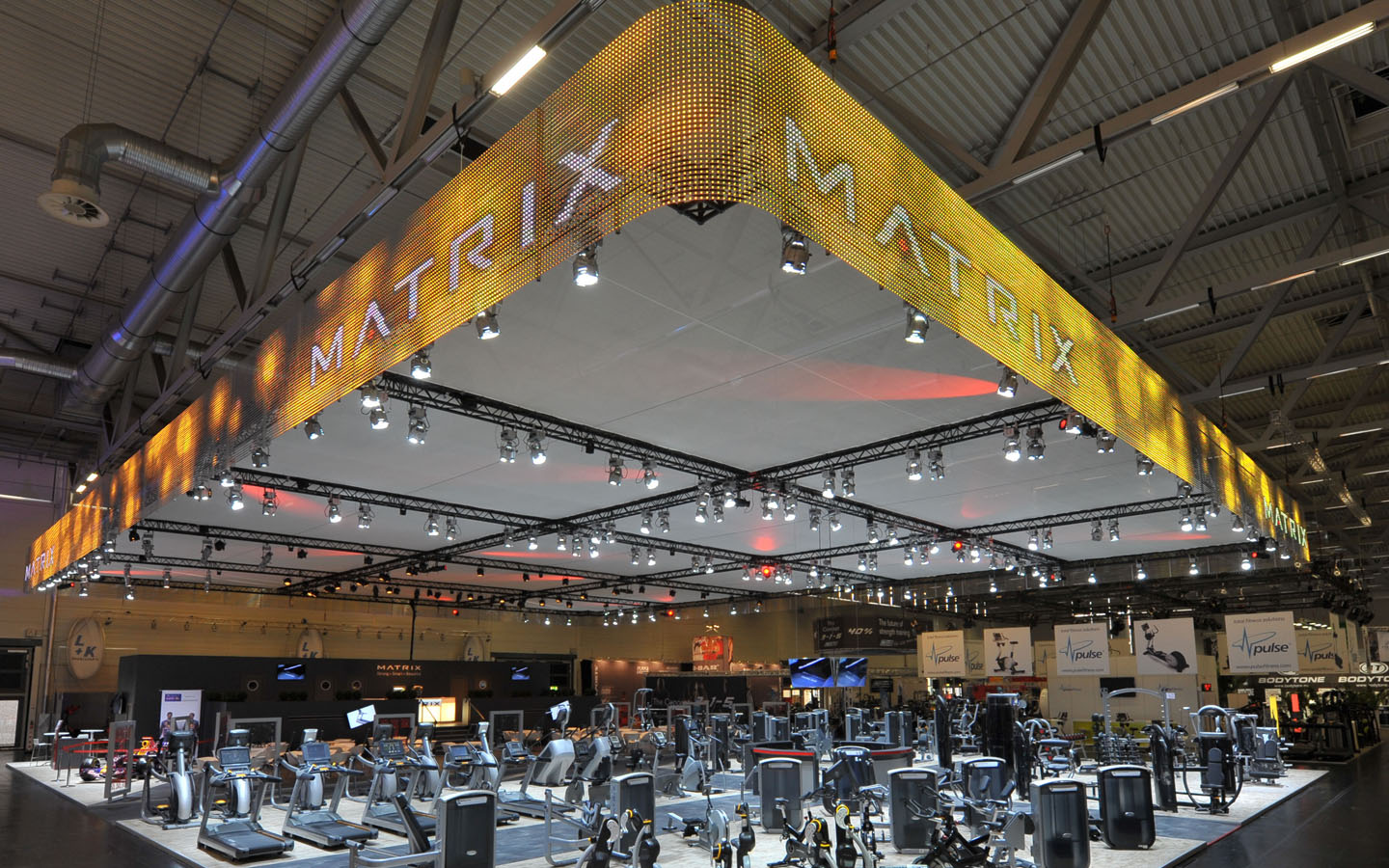